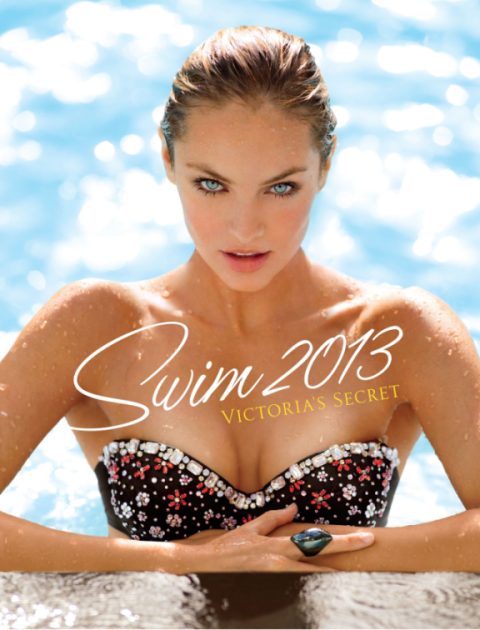 Victoria’s Secret has launched its 2013 swimwear collection alongside its new swimwear catalogue, which hit mailboxes at the end of last week.
South African native Candice Swanepoel appears in the Very Sexy Bandeau Bikini, a push-up design, on the first cover, photographed by Russell James. There will be four Victoria’s Secret Swim catalogues through 2013.
‘It feels amazing being on the cover of the Swim catalogue! Before I was a model, I used to see Gisèle [Bündchen], Tyra Banks and all of those iconic women on it. It is amazing that a little South African girl can get on the cover,’ said Swanepoel in a release.
The first 2013 catalogue was shot by James at the Turks and Caicos Islands and Miami, Florida, with a collection inspired by old Hollywood and starlets.
Swimwear trends at Victoria’s Secret include embellishment, prints and novelty fabrics, says the company.
As part of the brand’s marketing, musical artists are providing soundtracks in the Angels & Artists series, with Bruno Mars kicking off the first collaboration. The first video, Bikinis and Bruno Mars features Swanepoel and Doutzen Kroes, with Mars’s ‘Locked out of Heaven’.
Upcoming catalogues shot in Tulum and St Barthélemy will follow. The collection is available via the traditional catalogue, at VictoriasSecret.com, selected Victoria’s Secret stores across the US, and via its Ipad and Iphone apps.