We’ll catch you on Mastodon 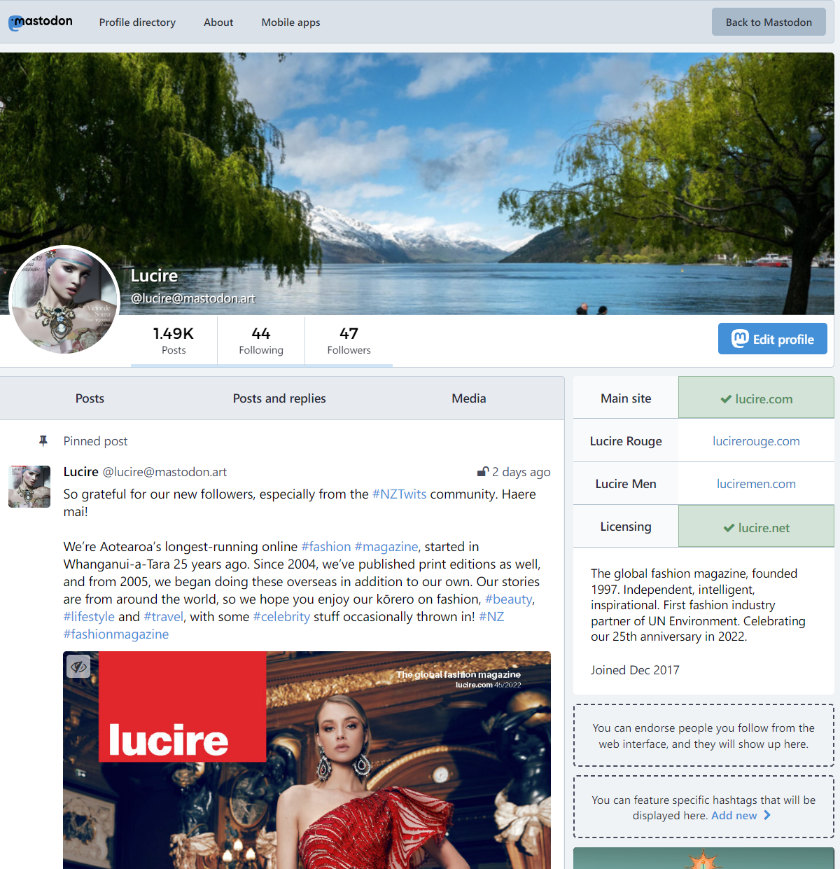 With Elon Musk taking control of Twitter last Friday, quite a number of users headed to other services, notably Mastodon, an open-source, decentralized social network created by Eugen Rochko.

Rochko created Mastodon in 2016 out of his frustration with Twitter, opting for something without algorithms. He has made the code open source so anyone can set up a Mastodon server, or ‘instance’, and each instance can communicate with others.

The experience is not unlike Twitter in the 2000s, before algorithms forced political and high-engagement content front and centre in users’ feeds—and consequently Mastodon is calmer and more enjoyable. Users might even find they reclaim considerable time compared to when they were on Twitter.

Lucire set up an account at Mastodon.art in 2017, just to share articles. As long-time readers know, we have never been focused deeply on social media as we saw their limitations, especially as organic reach had been throttled on some services in order to extract money from companies. Most of Lucire’s successful accounts are run by individual team members, assuming they still find utility and enjoyment from them.

As a company, we have not agreed with many of Big Tech’s moves, hence we began withdrawing their gadgets from our site: Facebook in 2018 before the Cambridge Analytica exposé, Twitter and Instagram last year. Since our 2021 web redesign, we’ve had ‘Follow us on Mastodon’ in the footer, and no other social media service. We have no desire to expose you to tracking or to lead you to something that might suck up your time. Musk, in particular, seems to be using his new toy each day to scare advertisers and businesses off as he courts the US far right, perhaps seeing them as a ready audience for whatever scheme he might have. Or perhaps he just wishes to get headlines and people talking about him.

So outside of this entry, let’s not give him that satisfaction unless he does something relevant to our subject-matter.

All this explains why we’ll be engaging far more on Mastodon now. Twitter and Facebook are automated for the most part and need little intervention from us. We occasionally post on Instagram but far less than during its heyday. We’ve been locked out of our Tiktok account and they don’t know how to get us back in. Please note we rarely check messages on Facebook, Instagram or Twitter now. For those civilized, old-fashioned conversations that you might once have had with us over social media, we hope you can toot us at @[email protected] or visit us on the web at mastodon.art/@Lucire. We support the principles of the fediverse and its free, non-corporate nature. It reminds us a lot of the web in its early days: open, optimistic, and more clear-headed.

Of course, our other channels remain open, such as traditional post, phone, email and our web forms, should you wish to reach out to us.


Jack Yan is founder and publisher of Lucire. Main photograph by Andrea Piacquadio/Pexels.