Now that The Grand Tour, the Amazon Originals TV series starring Jeremy Clarkson, Richard Hammond and James May, has launched, we can see where the first chunk of the £160 million budget has gone. And yes, some of it was in that eye-popping opening sequence in the Californian desert.
Divided by 36 episodes over three years, that equates to £4·5 million per show, or four-and-a-half times what Top Gear cost the BBC toward the end of the trio’s tenure.
But it’s becoming evident just why Amazon, which has been home to a lot of quality programming already, felt justified in spending the big bucks to get Clarkson, Hammond, May, and producer Andy Wilman, who himself once presented Top Gear.
This isn’t a series that’s just aimed at existing Amazon subscribers, but it is aimed at spearheading Amazon’s expansion into markets beyond the US, UK, Germany, Austria and Japan—the first five nations that got to see The Grand Tour when it débuted last Thursday.
Amazon has already announced that The Grand Tour can be viewed in 200 countries as of December.

But it doesn’t stop there. A few months ago, the trio announced Drivetribe, a web portal–social network to complement the show, and interested parties were asked to submit ideas for motoring-related “tribes”. Drivetribe warned tribe leaders they could begin to access the site at the beginning of November and to have content ready, and after The Grand Tour aired, Drivetribe opened to the general public.
With contributions from the trio, and seasoned journalists such as Chris Chilton, gifted YouTubers such as Paul Woodford, Finnish blogger Sara Näse, and even our own publisher, who leads a tribe called ‘The Global Motorshow’ linked to our sister site, Autocade, Drivetribe looks set to succeed where other attempts at motoring portals failed, spurred by the celebrity status of The Grand Tour’s three presenters. This is separate from Amazon to an extent but it’s not hard to see how it feeds on to The Grand Tour, which is why Amazon has no issue with it. According to Clarkson it’s the first time there’s been such a vertical integration of content on a motoring site.
To Motor Trend, Clarkson says the trio will be ‘very active’ on the site, and that they have their own money (and 21st Century Fox’s, to the tune of US$6·5 million, and private equity firms Breyer Capital, Atomico, and others’, for US$5·5 million) tied up in Drivetribe. 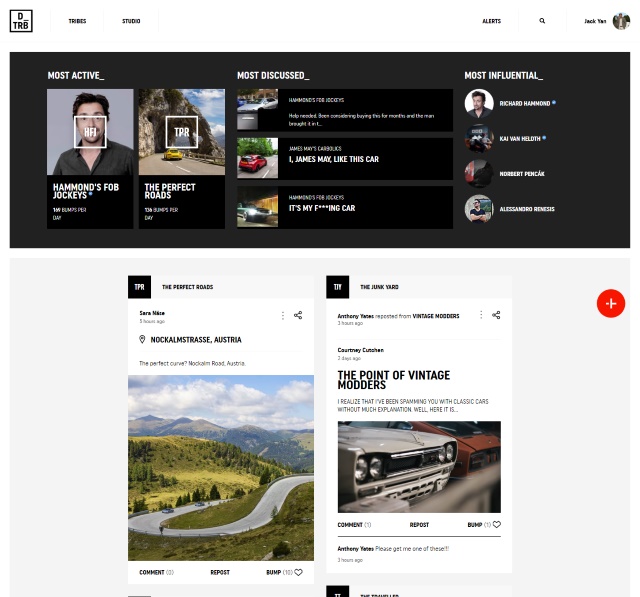 When you consider that they’ve had to start a business from scratch (including finding premises), and hire an entire crew, some who have come from Top Gear if you watch the credits, that £160 million has had to go in a lot of directions. Presumably some of the money for Clarkson, Hammond, May and Wilman has gone into Drivetribe.
Nevertheless, it’s an investment, and a gamble, for Amazon, which can use the show to get extra subscribers in existing markets, push it into new ones (where it will continue to expand beyond The Grand Tour), and know that there’s a website that complements and helps push the show. The presenters have referenced The Grand Tour in their own posts.
And Drivetribe’s got some big names behind it: Ernesto Schmitt (Zeebox), Anthony Rose (Iplayer), and Cate Sevilla (Buzzfeed UK, though some internet veterans may remember her blog at Vox.com)—people who know how important it is for a website to function well and not be bug-filled like Facebook.
Early reviews are mostly positive, unlike what Top Gear faced when fans rejected car enthusiast Chris Evans’s version. It proves, once again, that it takes time to find the magic in a show, and Clarkson, Hammond and May have been able to retain theirs. With their own necks on the line—the production company that makes The Grand Tour is theirs, and Wilman’s—they’ve taken it even more seriously, with some prudent business decisions that span both television (albeit via Amazon) and digital media (ironically helped by an old-media firm). It is bigger than Morecambe & Wise leaving the BBC to go to Thames, and, thankfully, the result is an improvement on what they made before.