Cultural observations: blokes on Botox; the return of The Sweeney When is too much Botox bad?
Simon Cowell got criticized last year for his droopy eye, which was said to have been caused by an over-reliance on Botox injections (if we wrote over-Botoxing, even with the capital letter, Botox’s IP lawyers will contact us). Last week, a British tabloid carried a story about a ‘miracle serum’ from Japan made from herbs and water, called Shinso skin care, priced from £155 to £255 per bottle, which reportedly Cowell has been using.
Unfortunately, if the latest videos that have run on Lucire are anything to go by, it isn’t working.
Here are two of them from The X Factor USA’s judges’ announcement:

We’re certainly not going after Cowell for using Botox—he’s up front about it, he’s not ashamed of using it, and, for years, it worked well for him. And he’s not likely to be the sort of person who’ll just go with any fad. But whatever is causing his current expressionless look around the eyes is concerning for us as viewers—these shows don’t work well without the big Si, and we don’t want to see him off our screens any time soon. The top story here at Lucire Men is one on The Sweeney remake, starring Ray Winstone and Ben Drew (a.k.a. Plan B). Now that the trailer’s out, there have been quite a number of negative comments on YouTube.
We know: there’s no point getting upset over negative comments on YouTube, because it’s living proof of John Gabriel’s Greater Internet F***wad Theory.
Comments are usually about how the show doesn’t look like The Sweeney. That’s good, isn’t it? Considering it débuted almost 40 years ago, we should be thankful people aren’t donning Dennis Waterman’s hairstyle of that era, or, for that matter, most of the 1970s wardrobe. We should, on viewing the trailer of The Sweeney, feel the same kind of disconcert that the fictional Gene Hunt would feel if he had an accident in 1973 and woke up in 2012: am I mad, in a coma, or forward in time? It’s a different era, so the show should look differently. It should even feel differently, in the context of 2012.
Then there are those saying Ray Winstone is no John Thaw and Plan B is no Dennis Waterman. Personally, we’d rather leave impersonations to Rory Bremner or Spitting Image, and have these two actors bring their own interpretations to the roles of Regan and Carter. As long as Jack Regan says, ‘Get your trousers on, you’re nicked,’ and the Flying Squad get aggro on some blaggers in south London, we’ll be partly happy at this magazine. If there’s a decent enough working relationship between the two leads—duty mixed with friction—we’ll be happier still. 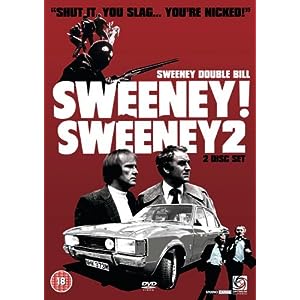 The indications are that these criteria are fulfilled, never mind if Jeremy Clarkson got a Serbian villain to speak in Cockney rhyming slang for a mock Top Gear story built around The Sweeney’s making-of.
The young’uns also forget that Sweeney movies have been attempted before in the 1970s, including the first outing, Sweeney! (note the exclamation mark). The Ranald Graham plot got so convoluted that the film could only finish when Michael Latimer explained the machinations to John Thaw in the last act. That has always grated with us, even if the rest of the flick was stylish (thanks to David Wickes’ direction)—so anything that doesn’t resemble that first effort, in our opinion, is a good thing. Good luck to director Nick Love, Ray Winstone, Plan B, Hayley Atwell and the rest of the team when The Sweeney hits cinemas in September.